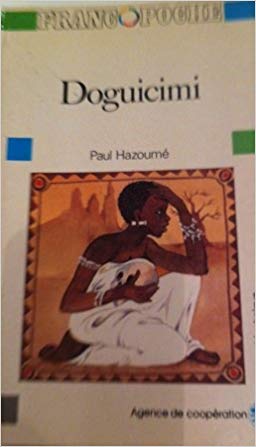 Convinced that all women, even those who seem truly attached to their husbands or determined never to let themselves be dishonoured, can be seduced, that those who remain indifferent to the first manifestations of love by a man, insensible to beauty, to the birth or standing of a would-be lover, deaf to his supplications or to the language of rich presents, would be unable to resist the charm of philtres. Vidaho had successively put everything into play in order to conquer Doguicimi.

When it came time to read my novel from Benin, I was thrown into a slight panic when I realised that what I had bought was not the novel I had chosen, Doguicimi by Paul Hazoumé, but a collection of literary essays on it! The novel itself seemed to be out of print, at least in French. If I was to go reading countries in order, I’d have to wait while I got a copy of the actual novel (or another one). One of the many perils of ordering books online. (Not long before, I had ended up with an Armenian book with the right title, but that turned out to be a collection of short stories, not the novel I wanted). Finally my second-hand copy arrived, covered in obscure pencil notes that I had to erase before I could read it. But I did have my chosen book.

Set in the old kingdom of Dahomey, it tells the story of how the king is so determined to go to war that he ignores the ancestors (whose wishes are transmitted via the ‘devins’ – soothsayers). His advisor Toffa is captured in the resultant debacle and is treated by definition as a traitor. Toffa’s wife is the feisty Doguicimi. Everyone is surprised that she doesn’t get done away with for speaking out, but it turns out Vidaho, the heir to the throne, has become secretly enamored of her and becomes obsessed with getting her, while Doguicimi remains steadfastly loyal to her captive husband at great personal risk till her horrible self-sacrifice. Personally, I found it hard to understand why she was so attached to him considering the way he had treated her! I suppose it is tradition and the need to be respected; perhaps her name (which is explained halfway through to mean something like ‘cite me as an example’ has something to do with it.

The people’s opinions about the Whites, who are starting their encroachment on the region, are fascinating – what the latter see as their strengths, the former see as their weaknesses. There is obviously what we would now call racism from both sides, but it is easy to understand the feeling against outsiders trying to take control of their land. By modern standards, the arrogance of the ruling class, especially, of Dahomey comes off as unpleasant.

It took me a long time to read (510 pages, plus rubbing out time!) but I learnt a fascinating amount about the culture of ancient Dahomey (renamed Benin after independence) from this book. It is a classic of early indigenous African writing and a rare chance to see this time through their eyes. 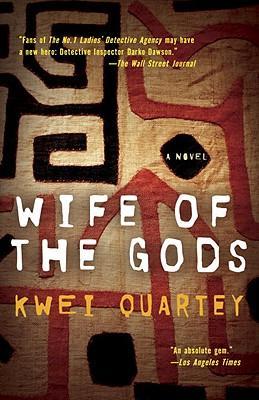 The forest was black and Darko was afraid to enter. The trees, covered from apex to root with dry, sloughing scales, beckoned him with their crackling, stunted branches. The forest floor erupted in a charcoal-colored cloud of dust as the gnarled, ragged tree roots burst from the earth and turned into massive, thrashing limbs. Swaying, the trees began to lumber toward Darko. He wanted to escape, but terror paralyzed him. He opened his mouth to scream but no sound came.

Fairly light-hearted for a murder mystery, but treating its themes with due consideration, this is a very likeable, easy-to-read novel. Yet I found I learnt a great deal about the local culture and ways of thinking from it. A ‘wife of the gods’ (trokosi) is a local girl offered to the local healer/witch doctor in expiation of some supposed transgression. That this is without the poor girl’s consent goes without saying… The not-very-nice witch doctor in this work is one of the prime suspects in the murder of a young woman who had locked horns with him in her anti-AIDS campaign, but did he do it? There are certainly one or two rather extreme AIDS remedies in this book! The hero, Detective Inspector Darko Dawson, who had moved to the capital Accra, digs up dark corners of his own past in this apparently sleepy village. He is a very likeable character, even if he does go off the rails occasionally (and understandably). I suspect this novel will be enjoyed by a much wider circle than just those who read murder mysteries. A totally enjoyable read.
Quartey was raised in Ghana but now lives in the US.