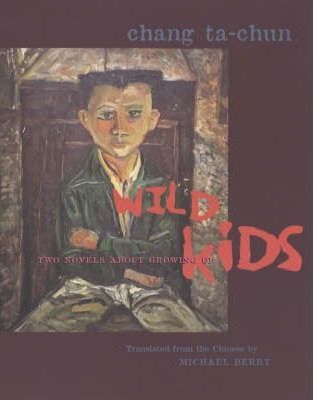 A long, long time before that, just after [my kid sister] had begun nursery school, she loved to wear a certain kind of checkered cloth skirt. She liked yellow and white, red and white, pink and white, blue and white… in short, as long as there were two alternating colors and the checks were no larger than a fingernail, she would wear it. Mom also liked to wear checks, and the two of them together looked like a couple of perfume bottles from the same factory – one big, one little, but other than the size difference, all the other specifications were identical.

Wild Kids is a sort of double novel, continuing the story of a pair of siblings. (Unfortunately the first part of the trilogy, “Chang’s Big Head Spring trilogy” hasn’t been translated into English yet). It sometimes feels like an Asian version of The Catcher in the Rye, and I’m sure fans of The Catcher will love this one too. It gives a gritty, violent yet funny view of the underbelly of Taiwan. Both are told by the wonderfully named Big Head Spring.
The first half-novel (My Kid Sister) was my favourite, in which he provides a lovely portrait of his slightly weird sister – when she goes through feminist phase (and everything is ‘what’s the point?’). She wants to marry her grandpa (‘yeye’ in Mandarin) and asks why foreigners are always singing ‘yeah yeah’ in pop songs! They live in a dysfunctional family, and, as seen from the kids’ perspectives, their parents are at least as strange as children! Taiwanese (not only Taiwanese) are disillusioned and cynical.
The second half-novel (Wild Kids proper) is rather darker, as Big Head gets involved in Taiwanese gang ‘culture’. He gets mugged after winning at a rigged slot machine. It climaxes in orgiastic rampage with a crane! Just as well it is infused with humour, otherwise it would be a bit depressing.
Obviously, the Taiwanese are just like the rest of us – it’s hard to be an adolescent, and everyone, especially one’s parents, is weird! It is often very funny, sometimes a bit gross!, with a peppering of existentialism.
I’m looking forward to physically visiting Taiwan as my next port of call!