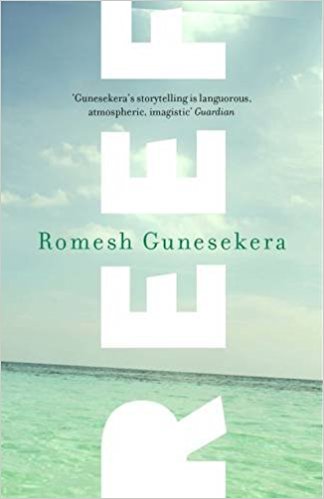 Should you read the blurb on the cover before reading a novel? I can’t help blaming my slight disappointment with ‘Reef’ on the blurb, and its shortlisting for the 1994 Booker Prize. Don’t get me wrong – the story itself is very readable and well-written. But it is quite lightweight and to compare it to Greene, Naipaul, Narayan and even Shakespeare’s Tempest (as in the quoted reviews) seems quite ridiculous. The blurb touts it as a love story – well the protagonist Triton doesn’t get any (unless you include mentoring). In fact it’s basically about his love for being a super house boy, for a marine biologist – although it’s obvious from his intelligence and fast learning that he will have a lot more to offer the world. He seems to totally miss the dangerous currents swirling around him in the ‘real world’ of the island. The endangered reef that the scientist is studying is obviously a symbol for the fraught political situation facing the country.
Its language is simple but sensuous:

Most of all I missed the closeness of the tank – the reservoir. The lapping of the dark water, flapping lotus leaves, the warm air rippling over it and the cormorants rising, the silent glide of a hornbill. and then those very still moments when the world would stop and only colour move like the blue breath of dawn lightening the sky, or the darkness of night misting the globe; a colour, a ray of curved light and nothing else. The water would be unbroken like a mirror, and the moon would gleam in it. At twilight when the forces of darkness and the forces of light were evenly matched and in balance there was nothing to fear. No demons, no troubles, no carrion. An elephant swaying to a music of its own. A perfect peace that seemed eternal even though the jungle might unleash its fury at any moment.

There are pearls to admire such as the Sri Lankan take on the Biblical flood legend.
As one who has experienced how bizarre Christmas is in Sri Lanka (even more so than here in Australia), I couldn’t help laughing at the experimental cooking of the turkey, with the Professor’s scientific input and Triton’s instinct.
Or is the novel like a reef, and did I just miss the profundities hiding beneath the surface? Perhaps I should re-read it… which will be no hardship.