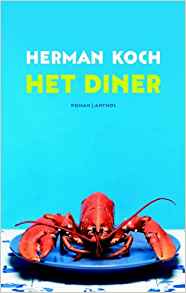 What struck you in the first place about Claire’s dish was the immense emptiness. Of course, I also well know that in the better restaurants quality is considered more important than quantity, but there are emptinesses and there are emptinesses. Here the emptiness, the part of the plate where there was no food to be found at all, was clearly put on a pedestal above all else, as a matter of principle.
It was as if the empty plate taunted you to say something about it, to go and make a song and dance about it, in the open kitchen. ‘But you don’t dare!’ said the plate, and it laughed you in the face.

This was only the second book I’ve read in Dutch (after Anne Frank’s diary).
Going by what seemed a boring title and plot, I wasn’t expecting much from this one (although perhaps the sinister looking lobster on the cover of my Dutch edition should have given me a hint). I couldn’t have been more wrong! I’m sure this will turn out to be one of the outstanding reads of this project.
Just as the label specifies, this acutely observed novel describes a dinner party – a particularly poisonous dinner party, with the cynical narrator and his despised bigwig elder brother, and their respective wives. The crosscurrents between the participants are fascinating. As the meal progresses, we learn that all of the diners and their family members have dark secrets, including one especially ugly one, and what the real purpose of the dinner is. We come to question who really is most sensible of the brothers. Normally you will tend to follow the narrator, but here you might or might not continue to do so. You come to realise that you have to deal with that trickiest (but fascinating) of narrative styles, the unreliable narrator. Koch plays with your viewpoint and sympathies. The scene, the meal, the restaurant’s workings and the interpersonal relationships are minutely – and cynically – observed.
It is a complete course in family – and restaurant – politics and psychology. You can throw in anthropology too – especially, is nature or nurture responsible for the boys’ behaviour?
Since the intrigue and the setting are so concentrated, I think there is the makings of a fantastic play here. (I found the movie disappointing, and why does everything have to be transposed to the US?)

I can totally recommend this surprising, uncomfortable, caustic novel.