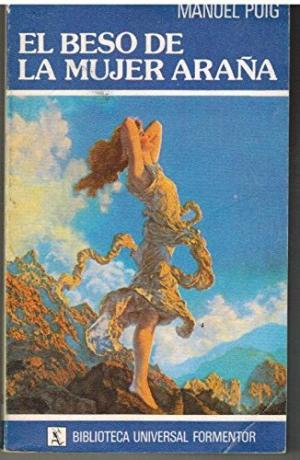 In her we see that she has something outré about her, that she’s a woman like no other. She seems very young, hardly more than twenty-five, the petite face a little catlike, the nose small and pert, the form of her face is… round rather than oval, the forehead wide, the cheeks large too but then falling to a point, like those of a cat.
[my translation]

This one was due to a late change in plans. I was going to write about Borges’ amazing Ficciones which is a collection of fantastic, deep and intricate short stories, but now I’ve decided to see if I can find a novel from every country to read. (I was also accepting short stories and epics, so I’ll have to choose a couple of new titles for some countries I’ve already read to catch up).
While this is certainly a novel, in a way you could consider Puig’s book as a series of short stories, linked by a framing narrative as in the Thousand Nights and One Night for example, although the frame is much more prominent here. (Only one and a bit of these stories made it into the great movie of this novel -filmed for some reason in Brazil, though the book is set in Buenos Aires – the first one, a story of a Nazi romance, along with a short appearance by the Spider Woman herself. As far as we are concerned, the Spider Woman is the gay man Molina, and he intoxicatingly relates the stories, in the manner of film synopses, to his cellmate, Valentín. For we are in prison, although it takes a while for us to realise this (unlike in the movie, where the bars are the first thing we see); Molina is in for “corruption of minors”, Valentín is a political prisoner. Each of them is a cosmic mistake: one a woman in a man’s body, the other a martyr who doesn’t want to be a hero. Each of them in fact, with differing degrees of willingness and success, attempts in turn to entrap the other. Molina, who has been apolitical until now, surprisingly turns out to be the stronger of the two.
When one of the pair is released, the authorities’ notes on the minutiae of his actions, as detailed as those of an entomologist studying a spider, are chilling.
One thing I found a little strange is the extensive Burton-like footnotes about the theoretical and psychological aspects of homosexuality, which go on for pages and were presumably placed by the author. Somehow they don’t seem necessary or appropriate in a novel.
Kiss of the Spider woman is a tour de force of storytelling and dialogue, powerful and thought-provoking.

My devastating Kenyan choice starts explosively with the protagonist being arrested for murder:

They came for him that Sunday. He had just returned from a night’s vigil on the mountain. He was resting on his bed, Bible open at the Book of Revelation, when two police constables, one tall, the other short, knocked at the door.

“’Are you Mr Munira?’ the short one asked. He had a star-shaped scar above the left brow.

’You teach at the New Ilmorog Primary School?’

’And where do you think you are now standing?’

’What are you talking about?’

’You are wanted at the New Ilmorog Police Station.’

’Murder, of course – murder in Ilmorog.’”

This is a much meatier and severer work than my Tanzanian book, Paradise. It is a searing endictment of a country newly liberated from colonialism, but now subject to injustices from its own leading classes. Someone obviously thought so – the author was imprisoned without trial because of it! It also has a much more bitter tone than Gurnah’s book.

Ngũgĩ is famous for having stopped writing in English. He highlighted the African writers’ dilemma of whether they should remain prisoners of their respective colonial languages, with the sugar of a vastly wider market and earnings, or should devote themselves entirely to developing their native languages, inevitably limiting themselves to a tiny market. If they do write in Kikuyu (Gĩkũyũ) (like Ngũgĩ; or whatever), and turn out a worthy work, they can probably be sure that it will be translated into English anyway, so it would seem to be better if the author himself writes the English version as well. But I have just read the bilingual In altre parole/In Other Words by Jhumpa Lahiri, about her experience in learning Italian, and I’m no longer so sure. She deliberately didn’t translate the work, which she wrote in (what seems to me magnificent) Italian into her stronger language of English for a complicated set of reasons based on wanting to be faithful to the language of composition.

Back to Kenya: A poignant moment comes when the schoolteacher Karega is teaching Kenya’s proud (pre)history while remembering its sufferings at the hand of nature and man:

“These thoughts mocked at Karega as he was carried along by the grandeur of the people’s past, the great cultures that spread from Malindi to Tripoli. He confided: The Earlies Man, father of all men on earth, is thought to have been born in Kenya… Lake Turkana… and he stood back and expected a gasp of disbelief or a few questions.

‘Yes, Muriuki,’ he pointed to a child whose hand seemed raised.

There was a great rustling of books, noise from the benches, children clambering from their desks. Muriuki had fallen down.’

The boy had fainted from hunger.

There is an interesting introduction by the author of my Ugandan choice, Moses Isegawa (to follow).

Petals of Blood is a key work to understanding the continuing impact of colonialism on the African psyche. It’s a bit of a plod (compared to Paradise, for instance), angry and depressing and occasionally confusing. But considering its importance and how much its author suffered for it, it deserves to be read.